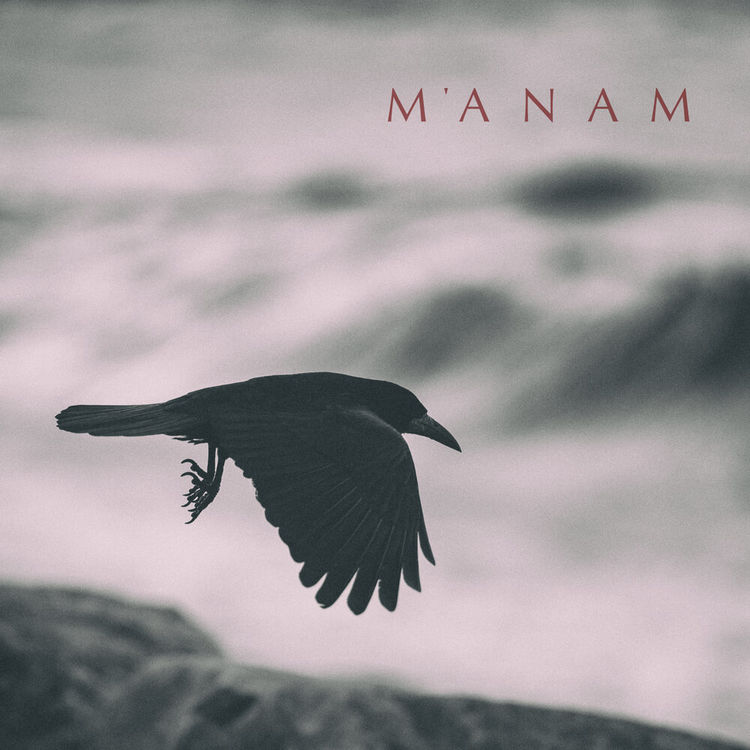 In 2019, I was commissioned to create an image for the cover of M'ANAM's self-titled debut album.

Below is an interview I did with Gavin Brennan (M 'ANAM) about my involvement in the project.

How would you describe your work and your artistic practice to someone who has never seen your work before?

I’m a visual artist who works through the medium of photography. I specialise in creating photo intaglio prints. This is the original method for creating photographic prints and requires the use of a printing press. In my work, I strive to capture the beauty that surrounds us in our everyday lives. My compositions range in content from panoramic landscapes to architectural details; and in style from the representational to the abstract. Most of the time, we passively see so much of the world as ordinary and commonplace, and it is only when we stop and actually properly look at things, that we notice the beauty to be found in the most mundane.

How did you first come across M’ANAM?

I knew a few members of M’ANAM through their work with the group Anúna, and was intrigued when Michael [McGlynn, director of Anúna] told me he would be forming a new vocal ensemble made up of just blokes. I then heard them perform at the Carrick Water Festival in 2018.

From your own artistic perspective, how would you describe M’ANAM?

M’ANAM and the music they create require you to stop and listen. The music demands your attention and because you move from passively hearing to actively listening you get to experience the music at a much deeper level. For me the sound they create is both pure and, at the same time, full of emotion. There is a timeless beauty to their music.

How did this collaboration between M’ANAM and yourself, two artists from different fields, first come about?

Mainly thanks to spending a number of stints at the incredible place that is the Tyrone Guthrie Centre. It’s an artist residency in Monaghan, where people come from all over the world. They practice a range of disciplines, including composing music, choreographing dance, writing novels, plays and poetry, and creating visual art. You get to spend a lot of time with some seriously talented people chatting about each others artistic practice. Michael McGlynn was one of them. Initially we didn’t chat about our own work, but instead talked about his father, Andrew McGlynn’s stunning photography, which I’d been introduced to through his brother, John. One of his amazing portrait shots is used for the cover of the single, The Sheep Stealer.

How did this particular piece, which we see on the album cover, come about?

I’ve been fascinated by Corvids (commonly referred to as the Crow family) for a real long time. They’re amazing birds that appear in a wide range of world mythologies. Described as both sacred and spiritual in many texts, they have often taken on the role of a psychopomp. They are seen as being a connection, and frequently a guide between the material world and the world of spirits.

I spend a lot of time by the sea in Strandhill as the experience settles me and brings me equilibrium. The presence of the Corvids is an integral part to this experience. To me, they are both within this environment and yet apart from it. I nearly always have a camera with me, and on this morning the Atlantic coast was being particularly wild, wet and windy. The birds were mainly huddled down amongst the rocks to protect them from the elements, and this one bird just seemed to defy the physical restrictions and majestically took to flight. It was such an amazing sight, and I was delighted to capture the experience in this image.

The piece is called Hrafnaguð from the Old Norse which translates to Raven God, one of Odin’s many titles. It seemed only fitting.

For this collaboration, did the music or the artwork come first?

As the production of the album was already in the pipeline when I got involved, the music came first and the artwork was created as a response to it.

Would you have done anything differently if it was the other way around?

Not really. Although I came onboard later in the production of the album, I was already very aware of their music and through regular chats with both Michael and Fergus I knew what they wanted to achieve with the album. Also, Michael was already familiar with both my creative process and artistic practice.

Did you have a new perspective on the potential for music and art to work together after hearing M’ANAM perform live?

When I first heard the guys sing in 2018, I just knew I wanted to work with them. The music resonated through me, and still does. Being immersed in the music, immediately brought some powerful visual memories back to life. For instance, listening to The Sheep Stealer reminded me of hikes across both Exmoor and Connemara; the barren landscapes and the harsh living conditions.

Although aware of some other amazing collaborations, I had never thought about the possibility of being involved in such a project myself; that is until I heard M’ANAM perform. I immediately began to wonder if my artwork could enhance this experience, by adding an additional and complementary visual trigger for the audience’s memories.

This isn’t the first collaboration between musicians and artists. Do you think there’s something in particular that helps connect sounds with visuals?

I believe that all good artwork, whatever its form, affects us emotionally, through our sensory experience and memory. We never experience anything through just one of our senses. This is the case as much for artists as anyone else. As a visual artist, my creative process is influenced by all sounds, especially music. I personally love to plug in my headphones and listen to music when visiting art galleries, and of course dependent on the music I listen to, my emotional response to the artwork varies.

It’s often said that one of the worst complements for an artist is someone to describe their work as nice. All artists, myself included, hope their work will create a strong emotional response from the audience. In my opinion, this is much more likely with a multi-sensory experience.

A lot of tracks on this album take inspiration from the texts and stories of other cultures throughout history. Do you think this diversity of cultural influences in music is the way forward? Can other Irish art forms learn from this?

Throughout history, all artists have implicitly been influenced by the world around them, and as the opportunity to experience cultures from around the world has become so much easier in recent years, so the cultural influences have become much more explicit.

This is partly because nowadays most people no longer look down on other cultures as we once did. This means that as a society we’re much more open to accept the fact that all culture is interlinked. Learning about and appreciating the cultural heritage of others, better helps us, as artists, not only understand our own cultural roots, but gives us the freedom to create using all the wonderful cultural resources that are available to us.

In the music of M’ANAM we not only experience this cultural cross-pollination through the use of historical texts, but also the inclusion of singing techniques from other cultures, in the form of throat singing which in its many variations can be heard in the music of Hokkaido, Sardinia, Mongolia, Tibet and the Arctic.

Do you think there’s a potential for future collaborations between art forms such as this?

Definitely. As artists we gain so much from our experience of other cultures, so working with other art forms can only be an enriching experience for our own artistic practice. On a personal level, this has been a fantastic experience, and something I would love the opportunity to do again.

After seeing your art work paired with this music, what M’ANAM track would you recommend people to listen to?

For me the track, Gunnarshólmi, resonates most with me. Although I’ve as yet to have the opportunity to visit Iceland, this song reminds me of some of the other beautiful wild open northern spaces that I have been able to visit, including the Yukon and Lapland. This, of course, is partly due to the raw emotion that Bjarni conveys in his singing about his homeland.

But, I suppose it’s the track, Bitter Wind that I associate most with my piece, Hrafnaguð. Not only the lyrics which bring me back to our coastline, but the depth and strength of Philip’s voice, which reminds me of the underlying power of the wild Atlantic Ocean and the men of the northern-lands who ventured out to explore it.

What’s next for you artistically?

I’m currently working on a number of concurrent projects; including an exhibition of multi-plate prints, and a long-term project about corvids. They’re such fantastic characters and are often overlooked as they’re ever-present in our lives. Also due to my work with M’ANAM, I want to further explore the multi-cultural beliefs in spirit animals.

Where is best for people to see more of your work?

You can see my photo intaglio work in the Graphic Studio Gallery in Dublin and my other work on my website, www.yewtreestudio.ie.

If you could describe M’ANAM in one word, what would it be?

Harmony. The voices of the different members of M’ANAM are in perfect harmony with each other when they sing these amazing tunes.
Next
Previous